In Audience of One, New York Times chief television critic James Poniewozik traces the history of TV and mass media from the Reagan era to today, explaining how a volcanic, camera-hogging antihero merged with America’s most powerful medium to become our forty-fifth president. Poniewozik combines a cultural history of modern America with a revelatory portrait of the most public American who has ever lived. Reaching back to the 1940s, when Trump and commercial television were born, Poniewozik illustrates how Donald became “a character that wrote itself, a brand mascot that jumped off the cereal box and entered the world, a simulacrum that replaced the thing it represented.” Viscerally attuned to the media, Trump shape-shifted into a boastful tabloid playboy in the 1980s; a self-parodic sitcom fixture in the 1990s; a reality-TV “You’re Fired” machine in the 2000s; and finally, the biggest role of his career, a Fox News–obsessed, Twitter-mad, culture-warring demagogue in the White House. Trenchant and slyly hilarious, Audience of One is a penetrating and sobering review of the raucous, raging, farcical reality show―performed for the benefit of an insomniac, cable-news-junkie “audience of one”―that we all came to live in, whether we liked it or not. 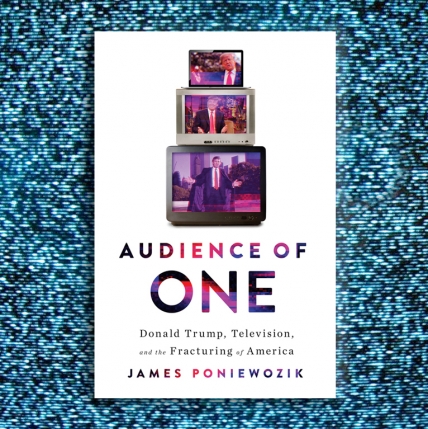 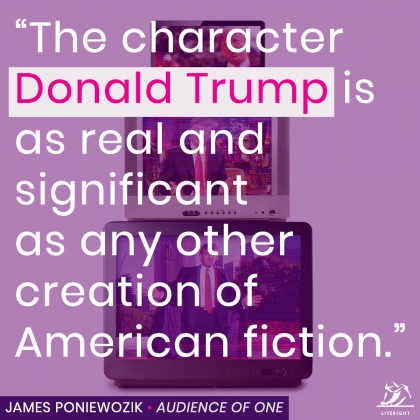 “Illuminating... Poniewozik is a funny, acerbic and observant writer… [He] uses his ample comedic gifts in the service of describing a slow-boil tragedy." –Gary Shteyngart, New York Times Book Review

“The smartest, most original, most unexpectedly definitive account of the rise of Trump and Trumpism we’ve had so far. It’s also the best book yet written about the bride-of-Frankenstein mating of American politics and American pop culture… [An] uncommonly rich and stimulating book.” –Tom Carson, Bookforum

“[A] stellar debut.... A deeply insightful history of vast changes in the media and popular culture during the period.... This intelligent eye-opener belongs on the small shelf of valuable books that help explain how Trump created his base.” – Kirkus Reviews [starred review]

“Caustic, scintillating cultural history….  Poniewozik’s trenchant, brilliantly witty critique of the cultural archetypes percolating into American politics is one of the best analyses yet of the Trump era.” – Publishers Weekly [starred review]

“A fascinating look at the ways television has changed and shaped the U.S., and a compelling lens through which to look at how we got to November 8, 2016.” – Booklist

“The Mueller Report of television criticism! James Poniewozik’s Audience of One is both damning and illuminating, a witty, penetrating exposé of Trump’s most intimate relationship, the one with the medium that made him.” – Emily Nussbaum, television critic for The New Yorker

“Now that the Donald Trump freak show has replaced all regularly scheduled programming, staggering us daily, as one of its longtime chroniclers I’m grateful for this brilliant, lucid, and essential book to help make sense of this American nightmare.” – Kurt Andersen, author of Fantasyland: How America Went Haywire

“In the vast literature of Trump-theory, Audience of One immediately takes a place in the first rank; it has to be read by anyone interested in understanding how such a buffoon became our nation’s chief magistrate. We have always known of course that Donald Trump’s success is attributable in some way to television; what we have not grasped―what we have refused to grasp―is how his career reflects the tastes and predilections of our beloved entertainment industry right down to the smallest details of its technological development. For anyone who still counts on enlightened celebrities to deliver us: Read this book and repent.” – Thomas Frank, author of Rendezvous with Oblivion

“In this brilliant new book, James Poniewozik shows how the media landscape increasingly fragmented over the past few decades, with the rise of cable, the Internet, and social media, and how our political world fractured as a result. Smartly argued and beautifully written, Audience of One deserves an audience of millions.”

– Kevin M. Kruse, co-author of Fault Lines: A History of the United States Since 1974

“With wit, insight, and clarity, James Poniewozik puts Trump at the center of a series of changes that swept through American popular culture and political systems. Poniewozik’s essential book shows how these evolutions incubated Trumpism, even as Trump’s rise exposed the limits and vulnerabilities of the media, which too often found itself floundering in the face of his shameless manipulations.” – Maureen Ryan, chief TV critic for Variety since 2015

James Poniewozik has been the chief television critic of the New York Times since 2015. He was previously the television and media critic for Time magazine and media columnist for Salon. He lives in Brooklyn. 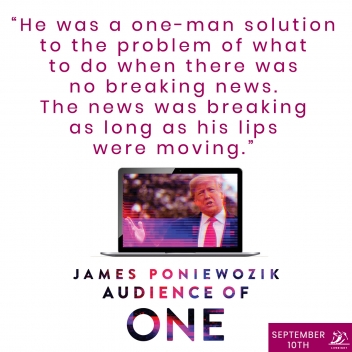